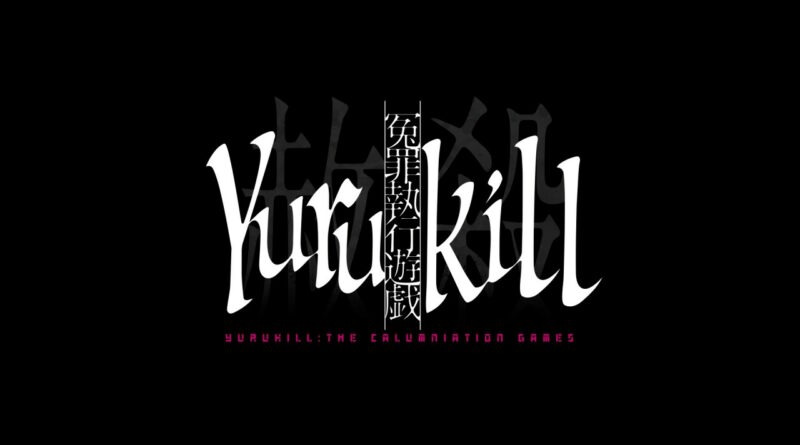 It’s been a while since I last played a Japanese visual novel game, so I don’t have too much familiarity with the genre lately. What got me interested in Yurukill: The Calumniation Games wasn’t specifically its visual novel gameplay, but the fact that it also contained a shoot-em-up aspect that was very prominently featured in its trailers. I had to see if the developers could pull off the mash-up and for the most part, they do.

The story of Yurukill: The Calumniation Games surrounds a group of prisoners who all claim to have been wrongfully convicted of different crimes. They’ve all been brought together to a mysterious island in order to participate in a competition to win their freedom. They must complete different challenges and be the last prisoner standing. Although each prisoner is playing for their own freedom, they also have a partner, called the “Executioner” who plays an important role in the proceedings.

The story revolves around five groups, totaling 11 participants. As you progress, you’ll directly play as four of those with one character Sengoku, being the main protagonist of the game. Each of their challenges focuses on the crime they’ve been convicted for. As you play a chapter, you’ll learn what happened and how the Executioner is connected.

These are further broken up into multiple sections. The first consists of plot progression through dialogue and your standard point-and-click puzzle solving. This part always has three smaller areas that you unlock by finding the key item in the previous section. The puzzles are pretty straightforward. Each room and section is pretty small, so finding the necessary pieces is pretty easy. Once you’ve collected what’s necessary, the game typically leads the story forward.

Different Genres meshed into one

After going through those rooms, you enter the “Urge to Kill” section. At this point, your executioner has revealed their connection to the prisoner. So, you enter a small quiz/challenge where you’ll need to plead for your life.

The goal is to answer their questions so that the meter doesn’t reach 100%, which means they execute you. The questions here are pretty vague, but as long as you don’t completely botch answering them, you should be able to advance. It’s all about appeasing them long enough so that they can’t kill you.

Once you’ve completed that part, you move to the next section, the shooter. The story explains this in a pretty cool way (it’s all just a game-in-a-game) but it’s essentially another aspect where you as the prisoner must try to prove your innocence to your executioner. Just like the first part of the chapter, there are multiple phases.

On the battlefield fighting for your life

Before entering the battlefield, you must go through and quickly answer a series of questions, which determine how many lives you’ll have. The questions here are always related to what just happened, so knowing the key points to the crime will get you the maximum lives. While you may get up to 20 lives the combat is fierce, so it’s quite likely you will lose quite a few along the way.

As you progress, you’ll face off against the executioner’s boss character. When you get to them, you’ll once again have to answer questions, this time with the aim of convincing them that you’re not guilty of the crime in question. Answering these questions wrong costs you three lives instead of one. The key to answering these parts correctly is understanding the conflicting information that proves your innocence.

By putting a larger penalty on answering questions wrong, you really must work smart to avoid having to restart a stage. The combat here is a lot of fun and the best part of the game. It’s a very simple approach but the multiple sections and frantic boss battles offer a lot of a challenge.

A decent story that doesn’t really surprise you

For a visual novel, the story is very linear. I was expecting a few twists and surprises, or at the very least a branching finale, but that’s not really the case. Fortunately, though, I was still very much engaged and wanted to see how it would conclude. It definitely helps that even with a large cast of characters, they each feel unique. While there is clearly one main character, Sengoku, the rest of the cast get their time in the spotlight and I never felt like there was too much filler.

This is a pretty linear experience. Get something wrong, you just die and replay that section again. But because of that, there is a lot that gets re-explained even though we as the player already know what is required. We know the different Yurukill stages, but since the characters don’t, the game’s host still ends up explaining the rules multiple times. Sure, it’s only a minute or so of extra dialogue, it could have been addressed differently so that each time it still felt fresh.

Also, the gameplay loop doesn’t change. Yes, there is some variety with the different challenges, but the formula stays the same, and we don’t get anything new. For a game that is already mixing multiple genres into one, I would have expected some sort of change to the last parts of the game.

Worth it in the end

I quite enjoyed Yurukill: The Calumniation Games. The standout is most definitely the shooter section of each chapter. Thankfully, as you unlock them, they become available to play on their own, but you have to play the story to get access to all of them. I’m not sure if this will lead me to play other games in this genre, but it’s still nice to experience something different.

I was supplied a code for this game for the purpose of this review.

My Thoughts on Gran Turismo 7

Playing Through the Golf Club Wasteland – My Review